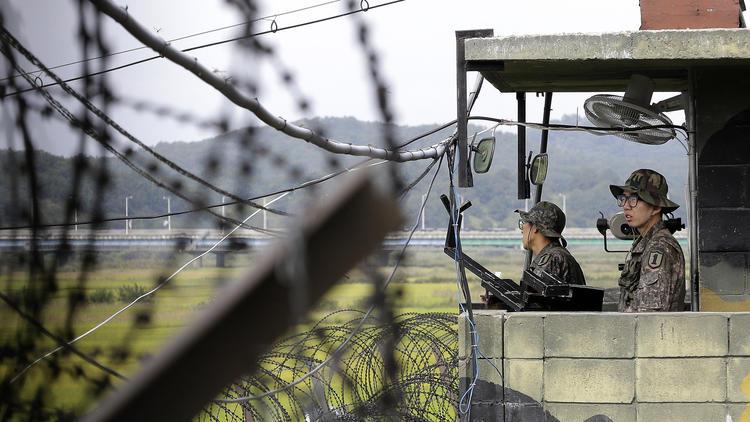 An American was arrested near Seoul  after trying to swim to North Korea, South Korean officials told local media.

South Korean marines arrested the man after they found him suffering from exhaustion on the banks of the Han River, the Yonhap News Agency reported. The man, believed to be in his late 20s or early 30s, told the marines he was attempting to reach North Korea so he could meet its leader, Kim Jong Un, Yonhap said.

A voicemail left at the public affairs section of the U.S. Embassy in Seoul seeking further details was not immediately returned.

If the man had made it to North Korea, he likely would have become the fourth American detained there.

Americans that have been detained:

Matthew Miller of Bakersfield was sentenced to six years of hard labor in North Korea. KCNA, North Korea’s official news agency, said Miller was attempting to carry out hostile acts “under the guise of a tourist.”

Miller entered North Korea legally, but reportedly tore up his visa and declared himself “not a tourist.”

Jeffrey Fowle, 56, of Ohio, has been detained in North Korea since May after he left a Bible behind him while on a tour. He has not yet been charged but could be put on trial soon. Korean American missionary Kenneth Bae has been held since 2012 and is serving a 15-year sentence for “hostile acts.” His family has pleaded for his release, arguing that his health is deteriorating.

In recent interviews with CNN, the three detainees asked that a high-ranking U.S. official be dispatched to North Korea to seek their release.

Defections across the border that separates South and North Korea are rare. The Han River runs westward through Seoul, the South Korean capital, and flows into an estuary near North Korean territory. The border is heavily guarded by soldiers from both sides and lined with tall barbed-wire fences.

PS: Share this with your friend teaching English in Korea.